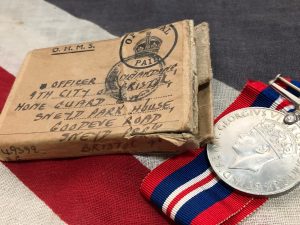 We know the 9th were based at Sommerville Road in early 1942 but have found no other records of further addresses.

Formed as ‘A’ Company Local Defence Volunteers in early June 1940 under Captain G.Talbot Plum with its HQ at 2 Beaufort Road, Clifton, to cover North Central Bristol (Central Civil Defence Area). The title LDV was officially changed to Home Guard on 30/7/40, by which time the company had been upgraded to a battalion. It was re-designated No.1 Battalion (City of Bristol) Home Guard in September 1940 and changed again on 1/2/41 when it was affiliated to the Gloucestershire Regiment, becoming the 9th Gloucestershire Battalion (City of Bristol) Home Guard, with its HQ at the Grammar School Ground, Kellaway Avenue. Lieutenant Colonel W. J. Barwell OBE took over as Officer Commanding on 15/11/41 and in early 1942 the Battalion HQ was listed at 99 Somerville Road, St.Andrew’s.

A nice lot that certainly requires much more research