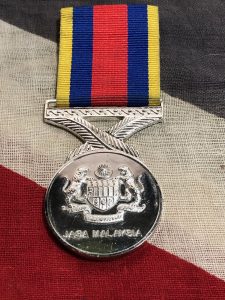 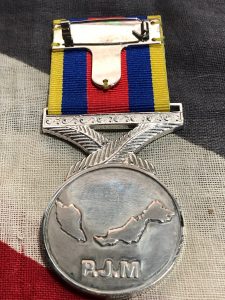 The Malaysian Service Medal (Pingat Jasa Malaysia) is a medal given by the King and Government of Malaysia. Established 3 March 2004, the medal recognizes service by members of the Malaysian Armed Forces during the Malayan Emergency, Second Malayan Emergency, and the Indonesia–Malaysia confrontation. The medal was also offered for award to members of the Commonwealth forces from Australia, Fiji, India, Nepal, New Zealand, and the United Kingdom who served in Malaysia during the Malayan Emergency and the Indonesia–Malaysia confrontation. The award is in recognition of “distinguished chivalry, gallantry, sacrifice, or loyalty” in contributing to the freedom of independence of Malaysia. The medal can be conferred and accepted posthumously by next of kin.

Mounted on a pin for wear.