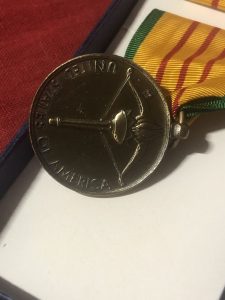 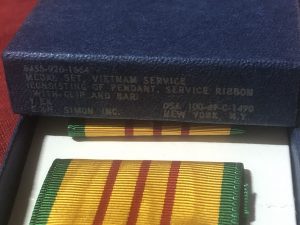 Authorized by executive order on July 8, 1965 for U.S. military personnel serving in the Vietnam Theater of Operations after July 3, 1965 through March 28, 1973. Personnel must have served in Vietnam on temporary duty for at least 30 consecutive/60 nonconsecutive days or have served in combat with a unit directly supporting a military operation in Southeast Asia.

Military personnel serving in Laos, Cambodia or Thailand in direct support of operations in Vietnam are also eligible for this medal. The Armed Forces Expeditionary Medal was awarded for earlier service in Vietnam from July 1, 1958 to July 3, 1965, inclusive; personnel receiving that award may be awarded the Vietnam Service Medal, but are not authorized both awards for Vietnam service.