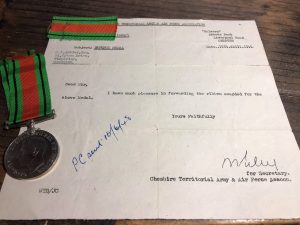 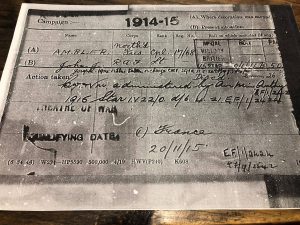 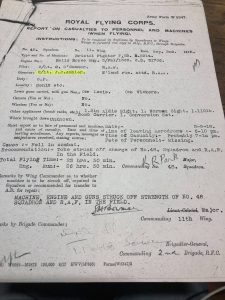 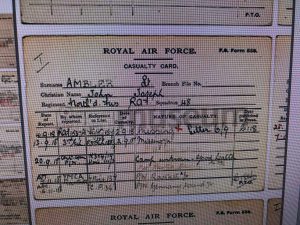 John was born to Tom and Margaret Ambler in York on October 30th 1896.
John attested with 17th Bn Northumberland Fusiliers (Railway Pioneers) on the 15th September 1914 and embarked overseas on 20 November 1915. When he reached the rank of corporal, he applied and received his commission in 1917.

John then later joined the Royal Air Force as an observer in the latest Bristol F2B fighters.
He joined 48 SQN RAF which at the time was commanded by Major Keith Park who later became Air Chief Marshal of the RAF and also became known as the ‘Defender Of London’ for his tactics in ensuring the safety of the capital during the Battle of Britain.

John was teamed up with 2nd Lt O’Connor, his pilot on the day he was shot down on 2nd September 1918, a month of infamy in the RAF as it became known as Black September. Along with Bloody April the same year, these were the two most deadliest months for the RAF in WW1.

The Battle of Droncourt-Queant raged below as 48 SQN fought in the skies. John, along and 2Lt O’Connor took off in their Bristol 12 F2B fighter (E2214) from their aerodrome approximately 18:10 and had been in the air for just over an hour when they were engaged in combat with Lt B Hobein (suspected) and were downed approximately 19.15.

John and O’Connor were taken prisoner and reported by the YMCA on 7/11/1918 as being in Rastaat camp, they were repatriated in Dover on the 8th December 1918.

John was awarded a Defence Medal for WW2 for service with most likely Home Guard. It was sent to him by Cheshire Territorial Army and Air Force Association.

In the paperwork its interesting to see it signed by Keith Park.
48 SQN had 4 planes shot down that day with 3 totally destroyed.

John served as ARP in WW2.

John later married twice and settled in Macclesfield where he died 1981.

All on original silk ribbons and sold with some research.