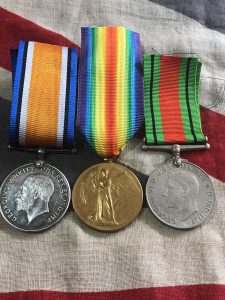 Born in 1887, Phillip Sydney Ryder was a tailors cutter by trade.In 1911, he was living at 13 Wellington Road, Swinton. He enlisted into the 179th Siege Battery which was raised in Fareham and served overseas.The 179th were sent to France in October 1916.

In 1939, he is living with Annie at Avondale, Worsley Road, Swinton, Lancs. It is noted he was serving with the ARP. His occupation now is the director of a building company.

All medals on modern ribbon