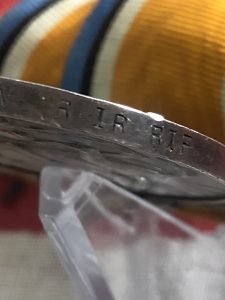 Born in Govan, Glasgow, Scotland, Frank enlisted and served with the 7th Bn Royal Irish Rifles. He was reported wounded on the 6th July 1916 and was killed in action on the 16th of August 1917 in the area of Menin Gate. The day started with a German barrage of shells at 4:15 am and then carried on with continuous enemy machine gun fire. The Royal Irish Rifles were alongside the Royal Dublin Fusiliers and the Royal Munster Fusiliers.

The 7th Royal Irish Rifles and the 9th Royal Dublin Fusiliers led the attack, with the 2nd Dublins in support. Some little time before zero hour on the 16th of August, the Germans had opened up a heavy barrage in which the 9th Dublins and 7th Faughs lost approx. 65% of the men in each battalion before they even began their attack. As soon as they attacked, the 48th Brigade was badly cut up by machine gun fire from German machine gun positions at the Potsdam, Vampire and Borry Farms which were in direct line of the advancing Brigade. B Company under Captain Byrne of the 2nd Dublin Fusiliers was practically annihilated, only two officers and three other ranks survived. The attack was carried out on open wet and muddy ground. A message had come back to the 2nd Dublins headquarters at Frezenberg Redoubt that the German machine gun post at Vampire Farm contained five machine guns. At 9:30 am, C Company of the 2nd Dublin Fusiliers, in accordance with orders from the Brigade, moved up in support of the 9th Dublin Fusiliers who had suffered severely from intense machine gun fire and succeeded in getting to within one hundred yards of Bit Work which was their objective. Only two officers and ten men remained, the rest of the battalion were either killed or wounded. This was the end of the 9th Dublin Fusiliers.

He is remembered with honour on the Tyne Cot Memorial.

We find an address for him, 85 Florence Street, Glasgow.

A lovely patina to the medal with the smallest of knocks to the rim near the ‘R’ of rifles (we have tried to show this in the pictures) Comes with a long length of original silk ribbon.