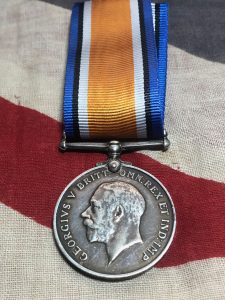 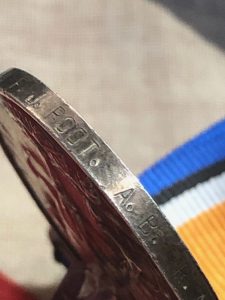 Frederick John Root was born in Sutton, Surrey in 1897. He was beginning his working life as a carpenters apprentice before enlisting into the Royal Navy. We first find him at HMS Ganges in May 1912.

He joins HMS New Zealand in January 1913 and stays with her until December 1915.  Aboard HMS New Zealand he saw the first naval battle of WW1, the Battle of Heligoland Bight.

The Battle of Heligoland Bight was the first naval battle of the First World War, fought on 28 August 1914, between ships of the United Kingdom and Germany. The battle took place in the south-eastern North Sea, when the British attacked German patrols off the north-west German coast. The German High Seas Fleet was in harbour on the north German coast while the British Grand Fleet was out in the northern North Sea. Both sides engaged in long-distance sorties with cruisers and battlecruisers, with close reconnaissance of the area of sea near the German coast—the Heligoland Bight.

He was aboard HMS Sutlej in the Azores at the time of Jutland. He served until 1928.

He married Violet Naomi Muggeridge in 1922 in Banstead.

We find him in 1939 living at 2 Holy Hill Bungalows, Rhobeth Pound Road, Banstead.

Medal on a length of modern ribbon.