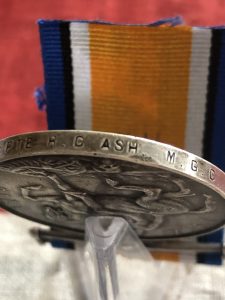 Reginald Charles Ash was 19 when he enlisted in April 1919 but saw service in the Russian Campaign from August to October 1919, he followed that by serving in Bombay. He also had the service number 7814486. He served with the 7th Battalion Machine Gun Corps. He served until 1921.

He was a railway porter when he enlisted and came from Haresfield near Stonehouse Gloucestershire.

Will come with some copied research.