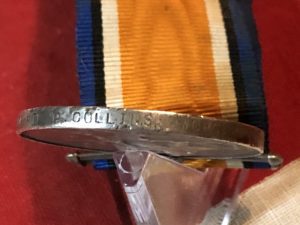 Percy was born in October 1896 in Bromsgrove. His next of kin, Hannah,  is listed as living in Catshill. Percy was reported missing on 24/6/1918 and was captured in Messines. He suffered a gunshot to the wrist. He spent time in the camps, Res Laz Antwerpen, Limburg, Wittenberg and Munster 1 before returning to the UK on 15/1/1919.

In the 1939 Register he is listed as living at 197 Broad Street, Bromsgrove, Worcestershire with his wife Annie and is working as an aircraft fitter. He was entitled to a pair but unfortunately the victory is missing, it is possible that he was entitled to the Defence Medal for WW2.

On a small bit of original silk ribbon