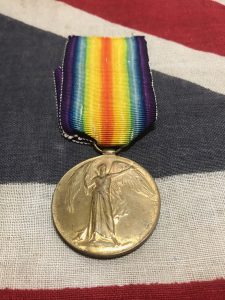 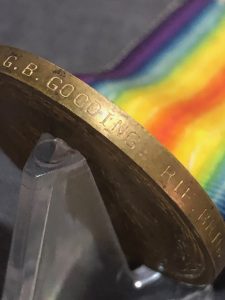 His mother, originally a hospital matron, in 1911 is recorded as a newspaper owner and Goodwin a journalist. Goodwin volunteered into the service and enlisted in Birmingham into the 7th Battalion Rifle Brigade. He went over seas to France with his Battalion on the 10th May 1915 therefore earning himself a 15 Star Trio.

Acting Lance Corporal Gooding was killed in action on 24th July 1915 by a German sniper while he himself was out sniping in No Mans Land. An extract from a letter sent home to his wife from a friend who enlisted with him reads

“I was not with Mr Gooding when it happened, I was talking with him a short while before, he asked me for some water which I had just fetched. he seemed in very good spirits and told me he and the Captain were going to do some sniping, I can assure you that Mr Gooding was a crack shot, as I dare say you know. He and the Captain were very fond of sniping and I can assure you that Mr Gooding did some very good and brave work. I miss him very much and so do many of the section, who wish to express their great sympathy to you.Mr Gooding died suddenly and his last words were “They have got me!” He was buried that night and a wooden cross with his name on was put on his grave”                    extracted from the book Horshams Heroes of the Great War

Goodwin is remembered on the Menin Gate.

Medal comes with a length of original silk ribbon plus the extracts from the book.