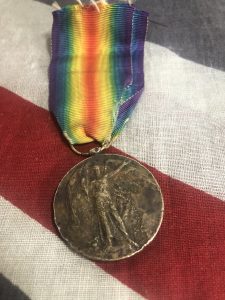 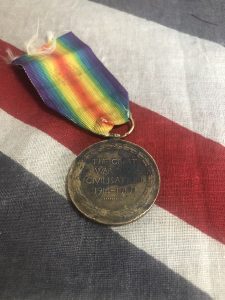 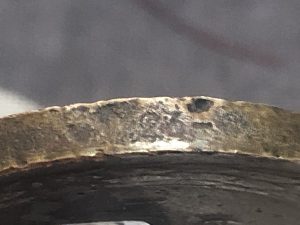 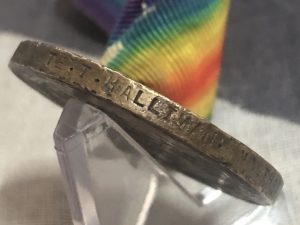 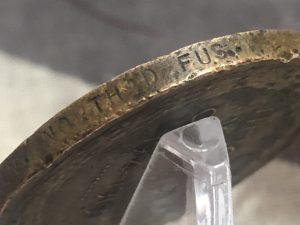 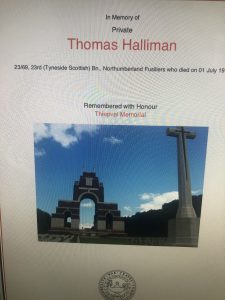 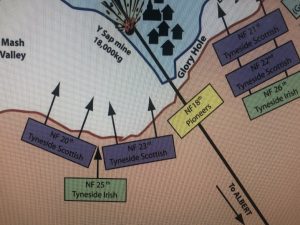 Thomas was born in 1892 and followed his father down the mines pre war Durham. He is entitled to a pair. He was with the 4th Battalion, 1Platoon A Company.

The Germans held the best positions overlooking the two valleys – one to the left hand side of Lochnagar Crater– this was nicknamed ‘Sausage Valley’ by the British as it usually had an airship above it on reconnaissance. The other valley, on the other side of the road, was nicknamed ‘Mash Valley’. This was the largest piece of No Man’s Land on the whole Somme battlefront (700m wide)

Rather than try a head-on attack at the village of La Boisselle, the Allies decide to attack either side. As part of this offensive they set off two huge mines, one near the road at the side of the village (18,000kgs) and one at Lochnagar, the biggest set off that day at 28,000kgs. The shelling stopped and the mines were blown at 7.28am. At 7.30am the soldiers went over the top.

It is reported in the diaries that A Company’s leader, Captain Cubey, was shot and killed before he had gone 100 yards and was still inside the British lines.

Its also reported they were piped over no mans land by the piper until he was either killed or wounded himself. It is most probable that Thomas was killed by machine gun fire from the German pillboxes.

Casualties at La Boisselle: The highest casualty rate of the day with over 6,380 officers and men either killed or wounded. Of these, 2,267 were dead. Thomas Halliman was one of these soldiers. Eighty-five per cent of the soldiers who died on this battlefield, 1,927, are unknown soldiers. Thomas Halliman died at La Boisselle and has no known grave.

He is remembered with honour at Thiepval.

The medal is very dirty and the naming, in places, has rubbed off, but on the whole is legible. There was only one Thomas Halliman that was KIA.