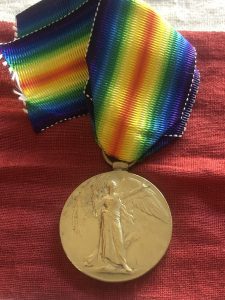 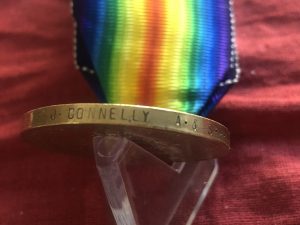 John was born in 1892 and was a spirit salesman when he enlisted into the 5th reserve Battalion in 1917 at Stirling Castle. His NOK, his mother, is noted as living at 80 Elder St Govan, Glasgow.

He first went to France in October 1917 then he served with the 12th Battalion in Salonica from June 1919 as part of the Army Of The Black Sea. He had a spell at SCD Nigg, the Scottish Command Division possibly based at Aberdeen or Inverness.

He is entitled to a pair. He was wounded in August 1918. On a long length of very nice ribbon, probably original.