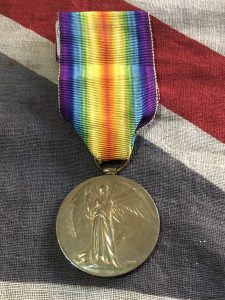 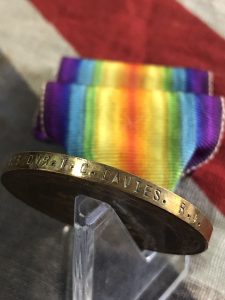 Thomas Charles was born in Lancashire in May 1898. He attested in January 1915and was discharged in March 1920. He was serving in France from 26 June 1916 and returned to the UK in September 1916 after letters from his Mother reached his headquarters requesting he be removed from the ‘firing line’ as he was not yet 19 years of age. In his records there are numerous correspondence between office trying to confirm his age. It appears he says he was 2 years older than he was. He only spent a total of 3 months overseas before being returned home and spent the rest of the War on Home Service in Edinburgh and Frinton On Sea, Essex.

The letters from his Mother show them living on Blackfriars Road SE.. Thomas also had the service number 950852 and served with the 5th London, 200th Brigade, and is entitled to a pair.

On a length of original silk ribbon