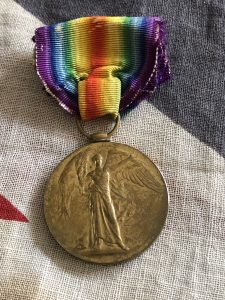 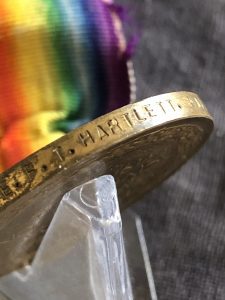 Francis Talbot Hartlett was born in Wolverhampton in 1896. He was re-numbered in the Hampshire Rgt as 356175. He was awarded the General Service Medal with Kurdistan Clasp. He served with the 1/9 Bn and was with the 1/4Bn attached to the 54th Brigadde Signal Section when awarded the GSM. In 1939, He was living with his wife Bernadine at 109 Harrow Road, Notts and it is noted that he was an assistant editor and also the night controller of ARP services Notts. He died in 1975 and there is a notice in the London Gazette in 1974 of his wifes death. An address of 138 Bramcote Lane Wollaton is recorded there.

He is entitled to a pair for WW1 service, also the GSM Kurdistan and we’d presume a Defence Medal for WW2.