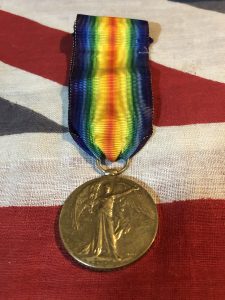 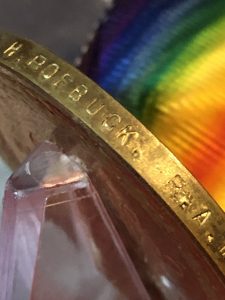 Harry served with the 32nd Field Ambulance RAMC before serving as 20830 in the Royal Irish Regiment. He was there a p art of the 5th Battalion which became the the Pioneer Battalion for the 1oth Irish Division. He was discharged in 1918 due to sickness aged 40 and awarded SWB numbered B60161.

Harry was born in Kirkburton in 1878. He was to become a schools attendance offer and later, a schools enquiry officer. He was married to Emily in 1902. Harry died in 1966.

On a long length of original silk ribbon.