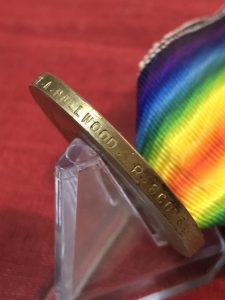 Albert was born in 1899 and was part of the 2/10th (Cyclist) Battalion Royal Scots, B Company and serving with them in North Russia in 1918.

Albert was shot in the head near his right eye and was lucky to survive. The wounding was reported on 27/1/1919. He was transported on the Hospital Ship Kaylan.

On checking, the 2/10th were engaged in an attack on the village of Topsa which was unsuccessful and they lost around 80 men, killed wounded or missing.

Worthy of much more research, comes with a long length of original silk ribbon.