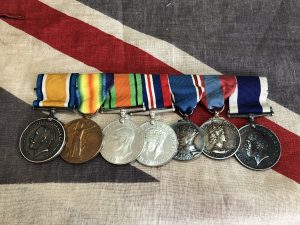 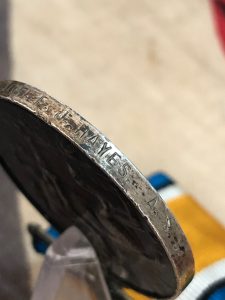 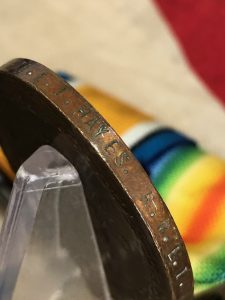 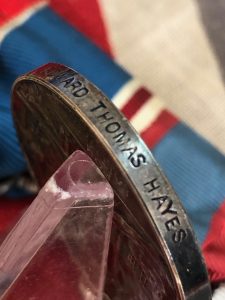 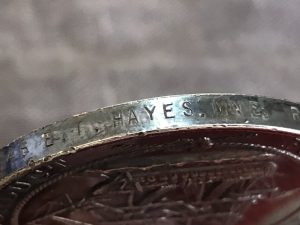 He had married Louisa in 1900 in Littlehampton and settled in Bath, his address being 16 Hungerford Road, Bath. He is entitled to a pair.

Son: Edward Thomas Hayes was born in 1901 in Littlehampton and was working as a Hospital orderly when he enlisted, underage, into the RMLI in April 1918.

Most likely training until the end of WW1, he was sent to Ireland in July 1921 with 800 other ranks plus Officers to assist in the Anglo Irish Problems. He was a part of the 8th Battalion RMLI, Irish Battalion. These troops saw some vicious fighting with 9 Marines killed in the first month.

“Orders were consequently given for 800 Marines to be sent to Ireland. Each Division plus the RMA had to send 195 officers and men, with “as many Old Soldiers as possible … to be included.” HMS Valiant and HMS Warspite were detailed as troopships and the newly formed battalion was ordered to concentrate on Plymouth.
At 4.00 pm on 3 June, 843 officers and men embarked. They arrived at Queenstown the following morning. On 18 June the Adjutant-General of the Royal Marines warned that units arriving in Ireland should be prepared for their ship to be fired upon and their train to be ambushed”
The Anglo-Irish Treaty was signed on 6th December 1921. Up until this time, there was a bounty on the head of Michael Collins, the Chairman of the Provisional Government of the Irish Free State, worth £10,000.
Collins was killed in 1922 by Denis “Sonny” O’Neill, a former British Army sniper, in an ambush.
Edward served up until May 1939 where he became a postman but with the outbreak of WW2, he rejoins and is posted to HMS Fox in Skegness. HMS Fox was a land station for the training of wireless operators, signalmen, telegraphists and the like. Other than there, he was also posted to HMS Royal Arthur in Lerwick Shetland Island.
He had married Rose L Cowley in 1927.
Victory Medal: PLY 20146 Pte ET Hayes RMLI
1937 Coronation Medal, Defence & War Medals, unnamed as issued
Imperial Service Medal: Edward Thomas Hayes
RN LSGC: PLY 20146 ET Hayes MNE
His LSGC was awarded in 1933 and the Coronation Medal is confirmed as issued. The ISM, We assume this is awarded possibly for work in the Post Office but unconfirmed.
All medals swing mounted “Navy” style on original silk ribbons
A great family group with the son being a part of a historically important chapter in British history.
The group is missing the fathers Victory Medal and the sons BWM.