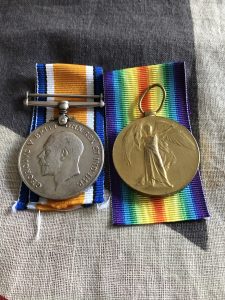 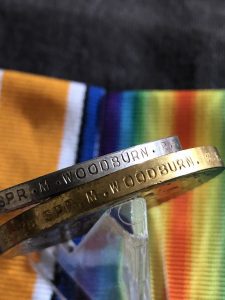 Matthew was born in 1886. Some records have him named as MS Woodburn and some as Matthew Templeton Woodburn. He was serving with 130th Field Company RE when it is reported that he received a gunshot wound to his neck on or about June 7th 1917. After this, it is reported that he was transferred to the Scottish Section. As for addresses, we have one for him in Jarrow, one in Byker one in Lancashire and yet another in Edinburgh. There is a wound report on the 20/9/1919 concerning and ‘old neck wound’ whilst with the 222nd Field Company.

He is entitled to a pair. He was a plasterer by trade. A confusing lot to work out but we are story there could be a good story in amongst it.