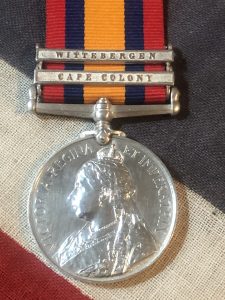 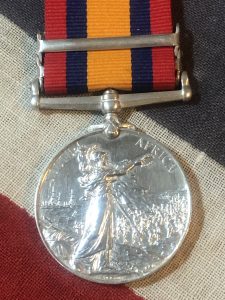 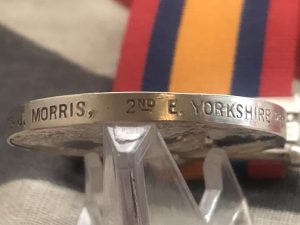 The 2nd Battalion sailed on the Nile on 14th March 1900, and arrived at the Cape on 3rd April. Along with the 2nd Grenadier Guards, 2nd Scots Guards, and 1st Leinster Regiment, they formed the 16th Brigade under Major General Barrington Campbell, and part of the VIIth Division under General Sir Leslie Rundle. The work of the brigade and of the division is sketched briefly under the 2nd Grenadier Guards.

The East Yorkshire Regiment were present in the action at Biddulphsberg on 29th May 1900. The battalion operated in the north-east of the Orange River Colony practically all the time they were in the campaign.

Excellent condition to a much sought after regiment. Comes with a length of modern ribbon.