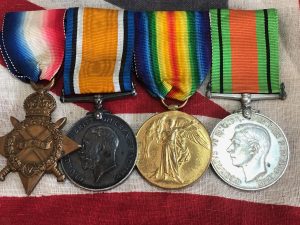 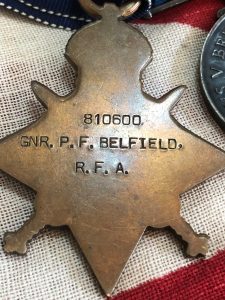 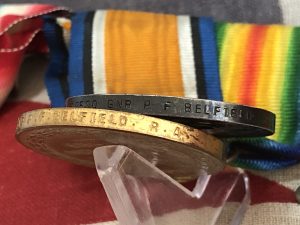 Peter first enlisted into the 3rd Derbyshire Regiment on 3/3/1899 and served until 4/12/1900. He saw no overseas service during his service. His address at that time is given as 34 Walker Lane, Derby.

He the attests for the Foresters on 21/10/1914 but duly transfers to the RFA 5 days later. He went to France in April 1915 and served right through until his discharge in April 1919. His address at this time being 135 Parker St, Derby.

We find him again in 1939 this time living with his wife, Emma and his son Peter at 11 Dale Road, Derby. He is recorded as being a labourer/heavy worker. It is also noted that he served with the ARP in the decontamination squad for Derby County Council.

WW1 medals are swing mounted on original silk ribbons and the Defence Medal is loose as expected.